I know what you’re thinking.  Maybe it’s a bit late to be posting about an April make?  That may be true, but I have a confession – I didn’t actually finish this in April.  I finished it much later than that, and now I’m playing catch up.

So far, I’ve shared my Toaster sweater, Saunio cardigan and Virginia leggings with you, and April’s Sew My Style pattern pick was the Bridgetown dress from Sew House Seven. 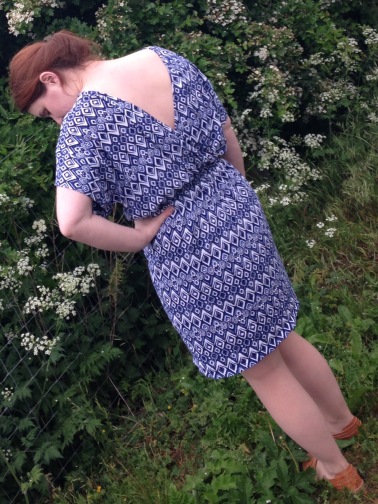 I love this dress and I was pleasantly surprised to find it suited me a bit more than I thought it would (though I did size down a lot).  I love the backless design, although, a couple of people on Instagram pointed out that it is reversible!  I was worried that the sleeves may have had a tendency to slide off my shoulders and that I might end up with ‘flashing issues’ (Bridget Jones, anyone?), but I have found that they behave themselves quite well actually.

The fabric
This was the most challenging bit – working with a super slippery viscose.  It’s beautiful and so, so soft, but it’s a slippery little sucker.  I got this from Sewisfaction, my new favourite place!  I so wish I lived in that neck of the woods so I could visit.

The pattern
Bridgetown, by Sew House Seven.  The instructions were easy to follow and this was a surprisingly easy make.  There are no fastenings or zips, no darts or shaping – just the elastic working its magic.  You even only have to hem the skirt because of the way the sleeve is designed.  I made no modifications whatsoever.

The cost
The fabric was £24, but I got 3 metres because I managed to get confused about how much fabric I needed.  I have absolutely loads left – enough for a top for sure.  And the pattern was around £9 with Sew My Style discount.  £33 in total.

Is anyone else taking part in One Week One Pattern 2016, hosted by the marvellous Cinderellis Sews?  You can find out how to take part here.  I’ve wanted to take part since 2014, when it last took place, but I just didn’t have enough made by then.  I vowed to jump on the OWOP bandwagon at the next opportunity, and here it is 🙂  And if you really manage to impress, you may even win a prize! 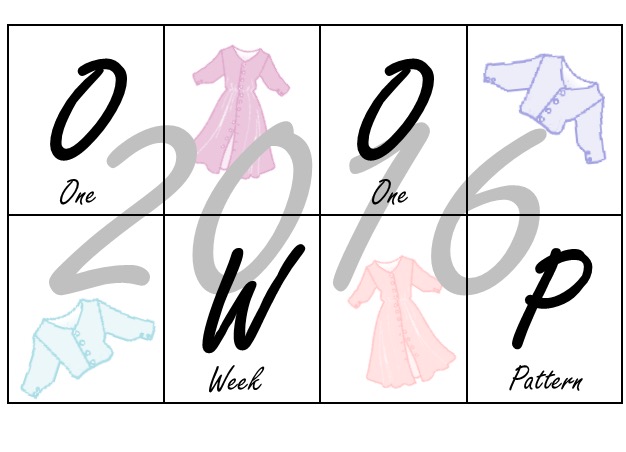 The pattern I’ve chosen is the Bettine dress from Tilly and the Buttons.  I love this dress!  I knew I would as soon as I saw the pattern.  It’s got everything I want from a dress – it looks stylish but easy to wear, it looked like a fairly simple sew (no darts, no zips etc.), and above all, it has those marvellously ginormous pockets – it’s all about the pockets for sweets. 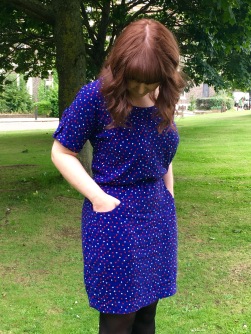 The fabric: an absolute bargain viscose from the Textile Centre – there’s none left now I’m afraid.  There was a ‘slight imperfection’ with the roll so they were selling it at £2.99 per metre.  It really was slight – a single line of damage across the weft in just one area (from the selvedge to maybe 4 inches in), which was very easy to avoid.  I ordered three metres, but I’m fairly certain I got more like four – perhaps it was the end of the roll.  Anyway, I have two metres left and I don’t think I could have got a whole dress out of one metre, so I think they sent me a little extra for whatever reason.  Thanks, guys! It was a bit tricky to work with because of the drape.  Having said that, it’s way easier to work with than any of the other floppy fabrics I’ve used.  I’d say viscose (it might be called rayon across the pond?) would be a good next step fabric if you want to move on to something more exciting than cotton.

The pattern: another great pattern from Tilly and the Buttons.  I know I mention Tilly and the Buttons a lot, but the patterns really are brilliant.  Bettine is no exception.  The instructions are so easy to follow, crammed with pictures so you have a good idea of what you should be doing, and Tilly usually does a sewalong of new patterns on her blog too, so you can find all sorts of useful tips on there.  I did the version with pockets (obviously!), cuffs and tabs.  It was my first time adding cuffs to something and that went quite well.  I did it wrong the first time – my own fault because I didn’t read the instructions properly (d’oh!) – but I was surprised at how easy they were, and they certainly make the dress a little more interesting.  The hardest part, as it says in the pattern, is sewing the elastic channel – because of the way it’s sewn, you can’t see any of your seam guides on the sewing machine, but I took my time and managed it with minimal wonkiness.  A huge thumbs up from me for Bettine 🙂

Modifications: just one.  Despite loving the pattern, I did notice while I was sewing that it had quite exaggerated curves around the hips.  It was a deliberate style feature, but I suspected it wouldn’t look so great on my body shape.  I’m quite hippy as it is, so I don’t need to accentuate them in any way.  I decided I would make it, wear it once or twice, and see how I felt about it before meddling with the pattern.  I knew I’d be able to take it in quite easily if I needed to.  I wore it to work once, but by the end of the day I was very aware of my hips.  A couple of days later I decided I’d shave some of that excess curve off the side seams.  Now, it’s perfect 🙂  I will wear this a lot!  I’ve altered my paper pattern pieces for next time and I already have fabric lined up for Bettine take two.